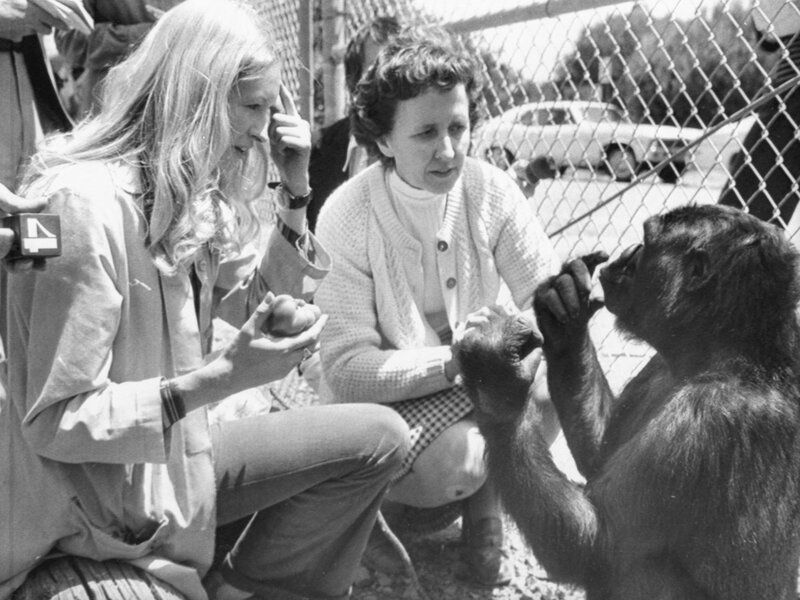 I found out this morning from NPR that Koko, the gorilla, known for her barrier-breaking communication, died. Happy Summer Solstice. A being that transcended cages, at least symbolic ones, died peacefully in her sleep.

I was six years old when Koko was born, but didn’t know about her until I was fourteen or fifteen when she started receiving national attention by communicating via Sign Language. There was a huge article in the National Geographic about redrawing the lines of communication. Our world had just gotten bigger, our embrace larger.

A few years later, she asked for a kitten. When the kitten died, she mourned and expressed her grief in words. I look back on these events now and wonder how we, as humans, can’t do half as well as that most days. Now we put children in cages and deny  communicating our basic needs or hearing the grief or the needs of others.

I was at the waning end of my preteen/early teen mad crush on Jane Goodall and the discovery of Koko’s abilities rekindled my love for primates and my One-Earth-feel- good-teach-the-world-to-sing philosophy. At least for a bit.

Newly released out of the hell-pit years of middle school and junior high, where I was the bullied and alienated freak, I was recreating myself. I didn’t have to be that twisted mess or be a bully, myself, anymore. High school was on the horizon like a beacon of hope. Everything seemed brighter and animals could talk. It was like Narnia was one step closer.

This morning, the death of Koko has triggered a palimpsest moment in me. I looked in the bathroom mirror, saw the usual wrinkle and bloat and then, from down there somewhere in the sub-basement, this fourteen year old kid welled up and cried. It was like another of my flooring joists had just given way.

The structure has shifted. I wonder if my house will have any good bones left. How do you repair a palimpsest’s foundation?

I love that fourteen year old kid who chose a gorilla for a hero. C’mon, that kid was way outside the box. So was Koko.

I am a non-traditional graduate from the University of Central Arkansas in the Arkansas Writers MFA program. I love Arkansas and it isn't what you think. (At least it isn't completely comprised of the headlines that you read.) Ok, well, there might be a whole lot of what you think . . . but keep an open mind. View all posts by Liz Larson